A few weeks ago was moving day. With the help of Hub’s brothers, all the heavy equipment was brought over from my old studio. While I still have some unpacking, I can’t wait to show you the reveal and share our upcycle ideas to inspire you in your own craft space!

Here is what we started with in the basement….

… and this is what the same vantage point into my new studio is like now! It’s the only expanse in the house that’s long enough to view the paint chip portrait I did of Hubs. I think it’s only fitting to display it on the drivers side of his beloved beetle!

The cabinets that we upcycled into the VW beetle desk started out life as temporary storage in our old kitchen. We never even got around to putting faces on the drawers! Luckily I saved them when we renovated the kitchen with the intent to repurpose them elsewhere. The transformation has made it my favourite highlight of the work we’ve completed in my craft studio!

The graphic is a picture of a VW beetle that Hubs restored almost 30 years ago. Now this piece is a real showstopper and amazing storage for my stash; repurposing at its best! Check out how we transformed our kitchen cabinets into a one-of-a-kind VW desk for my craft studio! 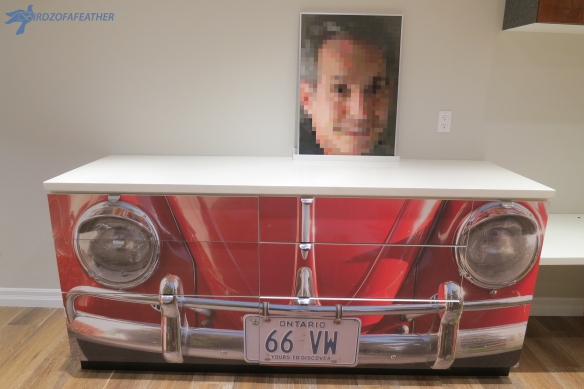 Repurposed kitchen cabinets + the old door from our cold storage room repurposed as a counter top make this storage unit a one of a kind piece!

The counter top had humble beginnings too. It was also the utmost in upcycling because of its several lives before its final use!  You may remember it as the makeshift work top we fashioned out of sawhorses when we tiled the backsplash in the laundry room. It was originally the hollow core door to our cold room and we really put it through its paces when we renovated the basement. It turned out so well as a counter top that Hubs even purchased another hollow core door and cut it down for the desk top right beside the storage cabinets.

Old door from our cold room got upcycled into a countertop – but not before we used it to tile our laundry room and build the rest of the basement.

Here’s where the door was located in the basement originally. You can’t see it in the picture, but it even had a huge hole knocked into it (which I would assume the kids of the previous owners of the house did). The hole got cut off when we repurposed it.

My studio is adjacent to our laundry room so there’s overflow from my craft room into that space too. It’s wonderful being in such close proximity to a sink and water where I can clean paint brushes!

Hubs just finished hanging the doors a friend helped him build on the upper cabinets. It was so exciting to see it finished.

The glass has a beautiful flowing pattern called everglade. It’s the same glass I used to create a new thermopane panel for our front door. We cut the glass ourselves and installed it with a painted backing to match the walls. It’ll give me something pretty to look at when I’m not busy crafting – and Hubs is doing the laundry 🙂

Speaking of pretty things to look at, I decided to display all my threads in a vintage oak glass display cabinet. I still haven’t unpacked all my fabric, so I’ll likely add some of that to the bottom shelf.

The shelf beside the glass cabinet beautifully displays my collection of old irons and a few other vintage cast iron finds. 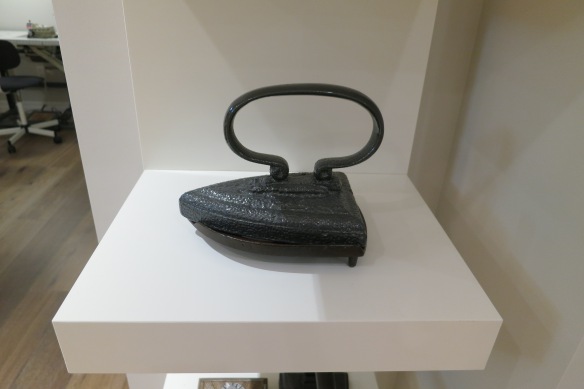 I found the perfect glass jar to store my buttons on top of the glass display cabinet:

The little card catalogue below is the very first one I ever owned. I love it so much that I got a bit carried away and now I have three card catalogues of varying sizes. One of the larger ones is in the sewing room which you’ll see later. 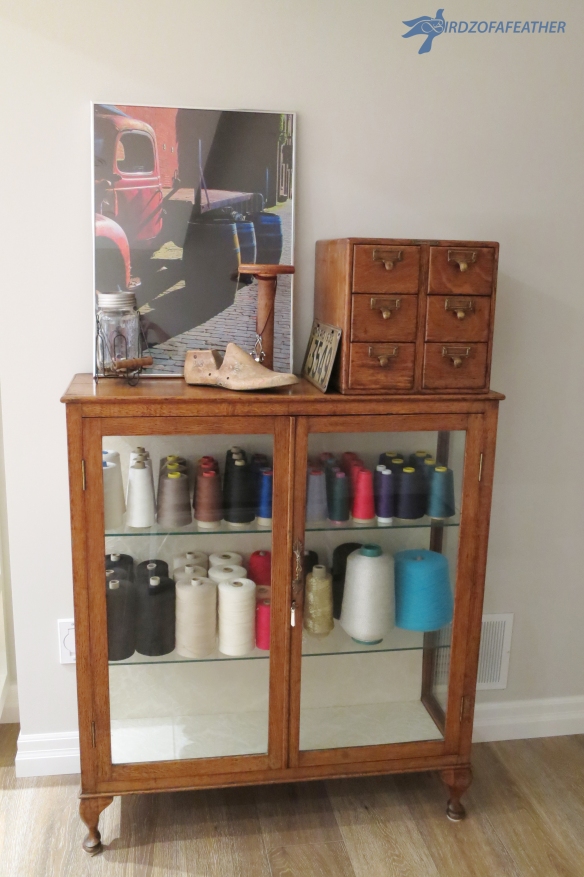 The picture leaning against the wall won’t be there long; it’s borrowed from Hubs’ man cave so I’ll have to sub in a different one.  I took the picture in the distillery district several years ago when I was taking a photography course. 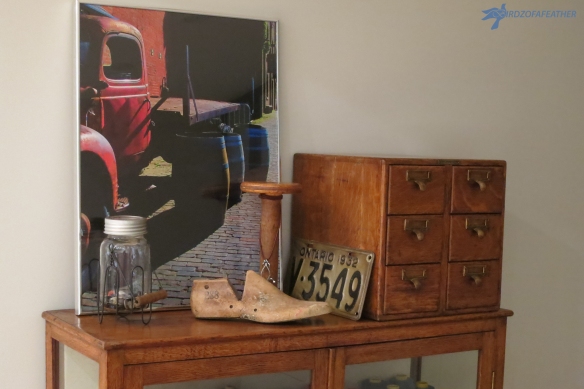 I have about 20 different pictures I’m in the process of framing and will likely rotate them between the man cave and my studio whenever I feel like a change. Now I’m displaying a picture we took at the Naples Botanical Garden. You can be sure there’s a future guitar planter upcycle in my crafting future!

Across from the thread cabinet is an old metal sewing machine base Hubs and I found on one of our antiquing excursions. Hubs painted it and I paired it up with an old wooden board (I’m not really sure what it was in its former life, so if anyone knows, please do tell!).

For my last birthday, Hubs repainted an old kerosene heater and commissioned a friend to paint a scene from our back garden around the front. I’ll be spending a lot of time in my craft studio during our long winter months, so it’s nice to have a reminder of our back garden to look forward to. 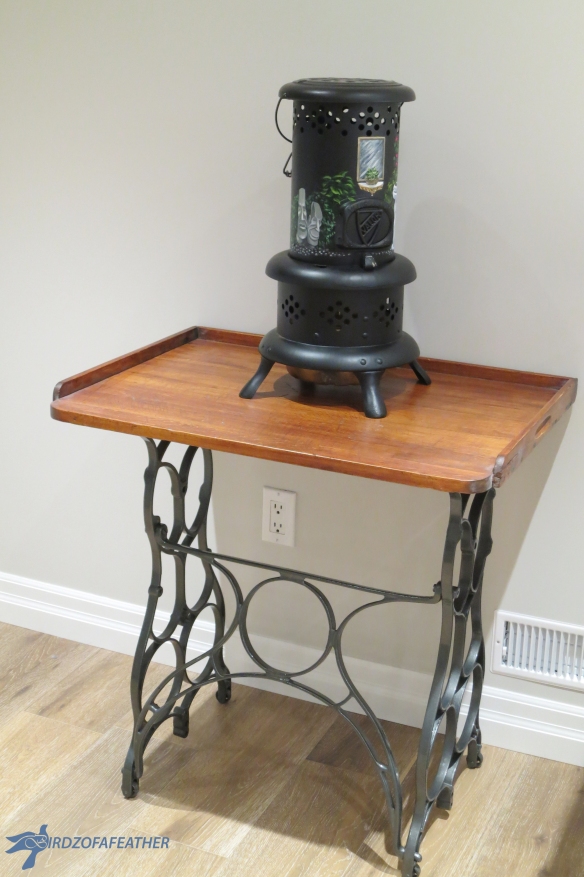 I have a few old sewing machines to display also. I may mount them on individual shelves right above this on the wall if things aren’t getting too crowded.

Across from the laundry room is where my cutting table is located. The peg board shelf that’s leaning up against the wall was a vintage shelf upcycle project that Hubs and I did a few months ago. 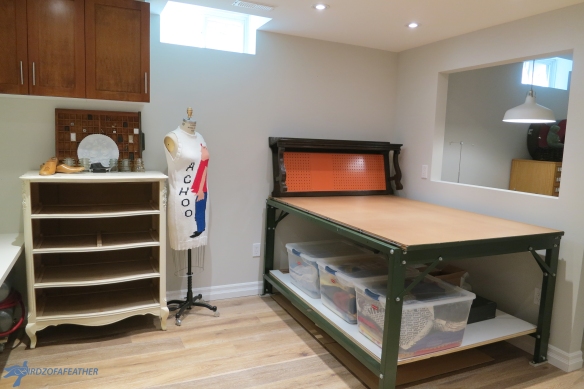 I was planning on hanging the shelf above my serger, but it didn’t work out there because of the hanging pendant light. It’s a shame because now I’ll have to find another place for my upcycled clock that I found for only $1.50 and added my logo to using vinyl film. 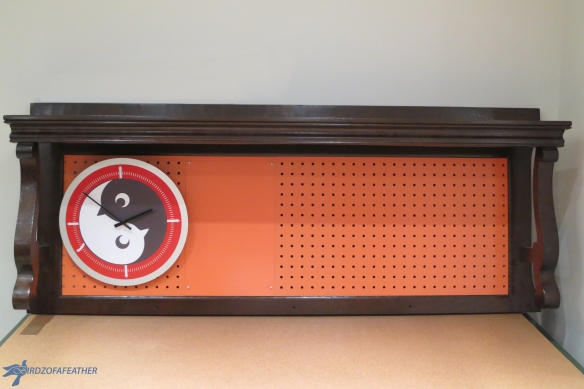 The perfect spot for the clock was on my pegboard shelf, but sadly I have no room to hang the shelf where it will be easy to access! You can never have enough pegboard in a craft room; I’ll need to juggle some things around! 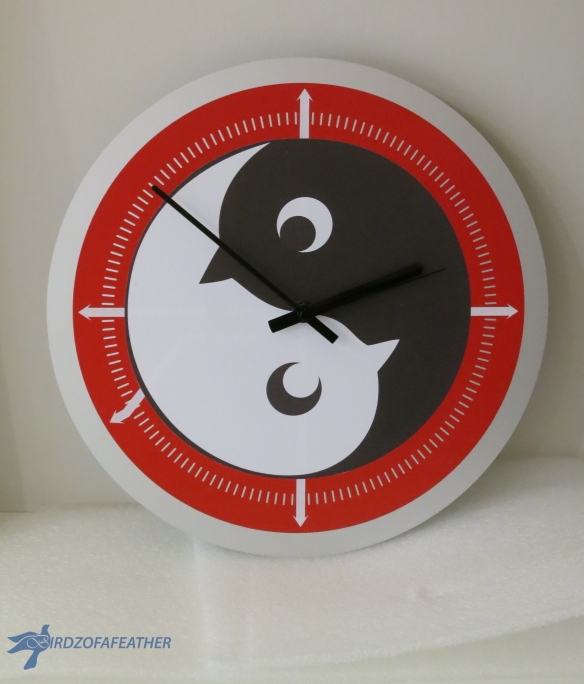 We found the shabby chic highboy in a thrift store. It didn’t have any drawers, however it’ll be great flat storage for works-in-progress or fabric. I have a few print press letters and trinkets in the old printer drawer shown on top of it that I’ll eventually fill in as I unpack my things.

Right beside the highboy I have an area for a desk which is simply the other hollow core door Hubs cut down and painted for me (as you saw above). Underneath it, I’ve stored my air compressor. 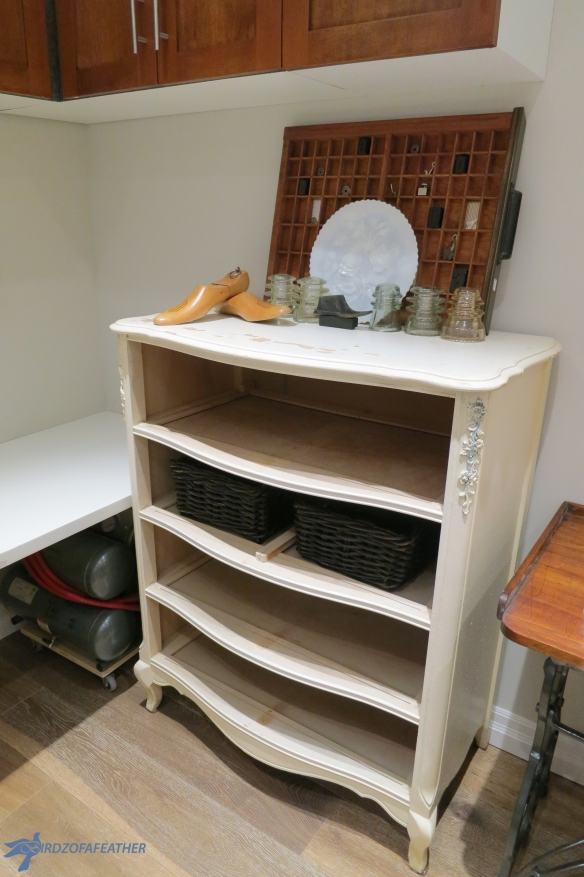 I’m still working on a vintage steno chair for the desk area. I’m also working on a drafting stool that used to belong to my uncle; I’ll use it for the cutting table. So far we’ve stripped the vinyl off the seat and painted the metal a tropical blue:

I have plans to either upholster the seat in leather or strip off the foam and restore the wood underneath. Either way, I’ll be painting it with my birds of a feather logo (just like I did with the clock).

When seated at my cutting table, I can see into the sewing room. I love having the feeling of open space instead of staring at a solid wall.

The sewing room houses my card catalogue and there’s task lighting in addition to the potlights to light up the sewing and serging stations. The pendants are on a separate switch and are dimmable, but you can never have too much light in a craft studio! I was originally going to install some vintage green pendants but they weren’t wired and buying these RANARP ones from Ikea was the quick solution to getting it done fast. The beauty of it is that I can easily swap out the white shades for the green ones whenever I want to give me a winter/summer option (the shade is just held on by a clasp)! 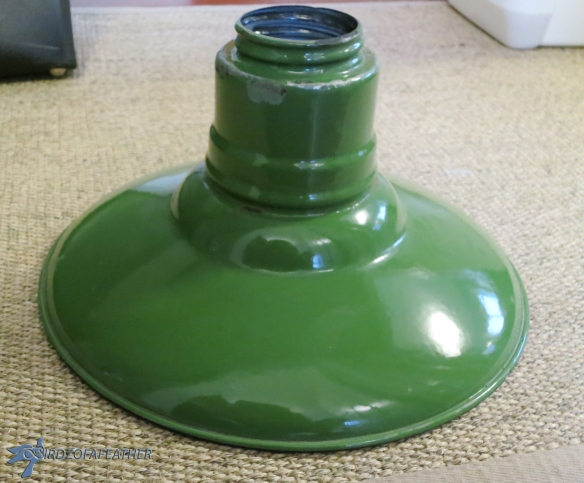 To see how these green shades look in the craft studio now, click here.

The card catalogue is from a local university. I’m so lucky to have it to store my smaller items. It’s so useful! 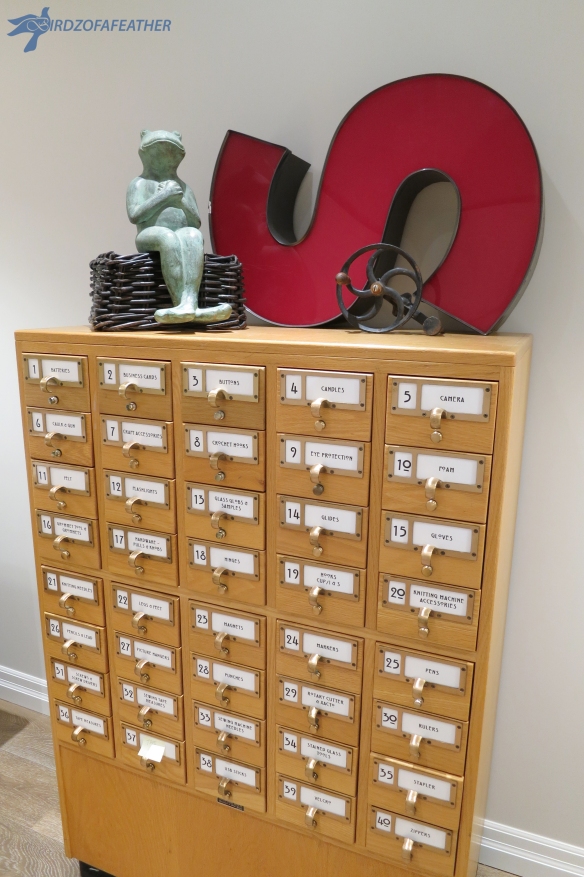 For larger storage, Hubs built me an expanse of Ikea cabinets that runs the full length of the sewing room. If you’re interested in how I planned this storage solution, you can also see all the details of how I designed it specifically for my craft room using Ikea’s Pax Planner. Hubs also built me pocket doors to close off the sewing room which backs onto his man cave.

Above the doors is a vintage street sign we found on one of our antiquing treks while in the U.S. Where it hangs faces north and it just so happens that my MIL grew up on North street so the find was a perfect fit on so many levels – not to mention that it just looks great!

I’m still undecided about what colour to paint the pocket doors! I’ve narrowed it down to four colours.  The orange is more ‘burnt’  than shown below and the blue is a historic colour with grey undertones. The other options are white to match the Ikea cabinets or a soft black, but those are a bit too neutral for my taste! The colour has to work with the man cave too; any of these colours would work. Let me know which colour you’d choose in the comments section. 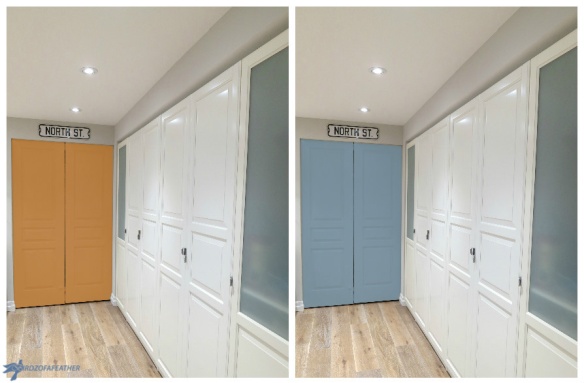 Spoiler alert update: I went with the blue 🙂

I’ll likely add in a few throw rugs here and there; especially in the sewing room so I can freely roll the chairs around without dinging up the wood floors.

Well, the craft studio is still a work in progress! I’m sure there will be some updates down the road as I finalize my storage options and unpack the rest of my things from the move. Check out how I’ve organized the craft studio and my stash so far!

At least now I can move my crafting off the dining room table and restore the rest of the house back into a somewhat better state of order!

After enjoying my beautiful craft studio for only a short while, it sprang a leak! While we were remediating water damage, it looked like a bomb hit it. The good news is that we rebuilt it again and it looks as if nothing happened! If you have a finished basement, you’ll want to read about what we did to prevent mold after a water leak.

Wanting a clutter free look after months of chaos, we ended up replacing the shabby chic dresser with this waterfall dresser (after transforming it of course!).

Be sure to pin for later:

Now to finish the man cave, which is also a work in progress, so we can finally sit back and relax a little. The basement has been almost two years-in-the-making in total between the laundry room, craft studio and man cave. Hubs deserves a long break after all his work turning our basement into usable living space! It’ll be nice to do nothing but sit on the couch in the man cave and eat popcorn this winter (with a little crafting thrown in for good measure).

The Making of a Craft Studio Series

Be sure to check out my new craft category, Birdz of a Feather~ Craft Rehab, to see what I’ve been up to in my new craft studio too!

Here are the links to previous blogs in the series:

28 thoughts on “The Making of a Craft Studio (VI): The Final Reveal!”