This post kicks off a 3-part series on low-maintenance/sustainable gardening. The side of our house doesn’t get a lot of sun, so we planted shade tolerant hostas and ground cover to fill in that area and crowd out weeds and aid in water conservation. The hostas have filled in beautifully over the years, but by mid summer they are all torn to shreds and have more holes than swiss cheese.

Batman may be resigned to fighting thugs, but we were tired of fighting slugs: we wanted to put a stop to their reign of crime once and for all. We tried every natural solution from eggshells to diatomaceous earth to no avail, until we finally found the answer: copper!  Forgive the bad pun, but just like commissioner Gordon of Batman fame, a little ‘copper’ goes a long way to fighting crime. 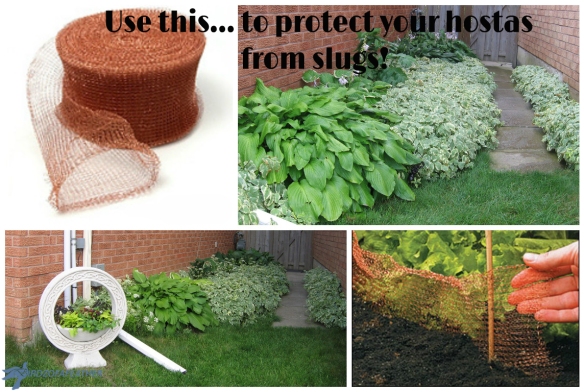 What is Copper Blocker?

Copper blocker is a roll of mesh made from copper that can be easily installed around hostas in the garden to repel snails and slugs. Unlike poisonous pesticides, it’s non toxic and won’t harm other living things.

How to Save Hostas From Slugs

Last year we ran an experiment: we wrapped pure copper wire mesh around the bases of half our hostas and left the other half as-is. We had read that copper repels snails and slugs because they don’t like to touch it. We thought it would be worth a try – and who doesn’t love a pest-control product that’s non-toxic and sustainable!

By the end of the summer, the hostas we wrapped with copper were hole-free as compared to the others that weren’t (you can see the large hosta in the foreground below has several holes in the leaves). No more slugs on hostas; ‘Hosta’ la vista, slugs! Overall, even the ones we didn’t wrap had less slug damage than usual.

The next year we purchased another 25 ft of Copper Blocker to wrap around all our hostas.

We made a shallow trench around each clump. It’s easier to wrap the hostas first thing in the spring when they are just peaking through the earth, as you see below.

You can also do this later in the season, but you’ll probably need another set of hands to hold back the foliage while you wind the mesh around the base and secure it.

Don’t be tempted to wrap the copper too close to the Hosta. That’s because it needs room to expand as it grows through the season! Here, we’re using an old piece of Copper Blocker. It tarnishes like an old penny, but works just as well as the new stuff!

The previous year we dug a shallow trench around each plant and buried the mesh below the soil so that nothing could sneak down under it. However, this year we trenched and also used galvanized garden pins to secure the copper into the ground.

We pinched the ends together and crimped them closed to join it into a circle. Further, we then added the galvanized pins. Consequently, that should hold the mesh in place all season long – if not longer! Perhaps the addition of the pins will hold it for a few seasons so we don’t have to place them again in the Spring; we’ll let you know next year!

Here’s a close-up of the newer stuff we added this year.

Last year we endeavoured to spread the mesh out vertically (as you see below), but we found pinning the mesh is just as effective against the slugs and faster to secure!

We LOVE how the hostas look at the side of our house in the spring and summer months:

UPDATE: Hubs’ friend was reading our post and let us know that she has used copper pennies. Unfortunately pennies are no longer being minted in Canada, but if you have some kicking around they would be worth a try too! Just sprinkle them on the ground around your hostas.

Saving our hostas make us feel like superheros. So now we get to enjoy them hole-free through the entire season (which sadly isn’t too long in Canada)!

If you’re interested in trying out copper blocker, make sure you are getting a 100% copper product or it may not work. Here’s a link to the one we use (by the way, we’re not an affiliate – we just love the product!).

If this project on how to save your hostas from slugs has inspired you to go hole-free too, share the wisdom by pinning!

For more garden inspiration check out the following posts:

You’ll find more great gardening ideas for National Garden Month at DIY Idea Center and can even subscribe to a variety of newsletters.

If crafts are your thing, check out the following creative and sustainable projects in our Craft Rehab category. 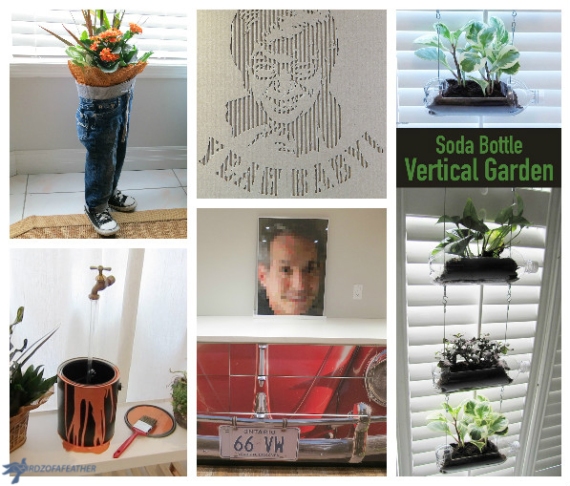