This picture ledge DIY idea sprung out of this year’s reno project: finishing the basement. We recently completed my craft studio and have been working on the mancave too. It’s a testament to how you can upcycle scrap pieces wood into functional decor!

Hubs surprised me with this as a gift; made especially for the stairway leading into the basement. Before starting work on the basement, the stairwell was the drop zone for our central vacuum system accessories.

Although updating the basement stairs is on the Horizon, Hubs built the picture ledge along the staircase so I could display some of my photography. I have to admit that it’s great to have something pretty to look at in the meantime, even if it’s still a raw space!

The Stairwell Before the Picture Ledge DIY

Hubs tore off all the old drywall to start fresh and gain every inch of space he could. Here is the stairwell in progress: 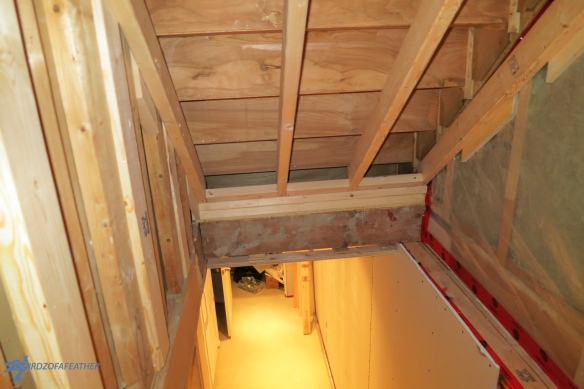 On one side of the stairway, he built up the depth of the ledge to create a ledge shelf. Below, you can see two views looking up and down the stairs. Most people would just keep the drywall flush all the way up the wall, but this way we gain some display space with less chance of accidentally knocking down our decor as we brush by. 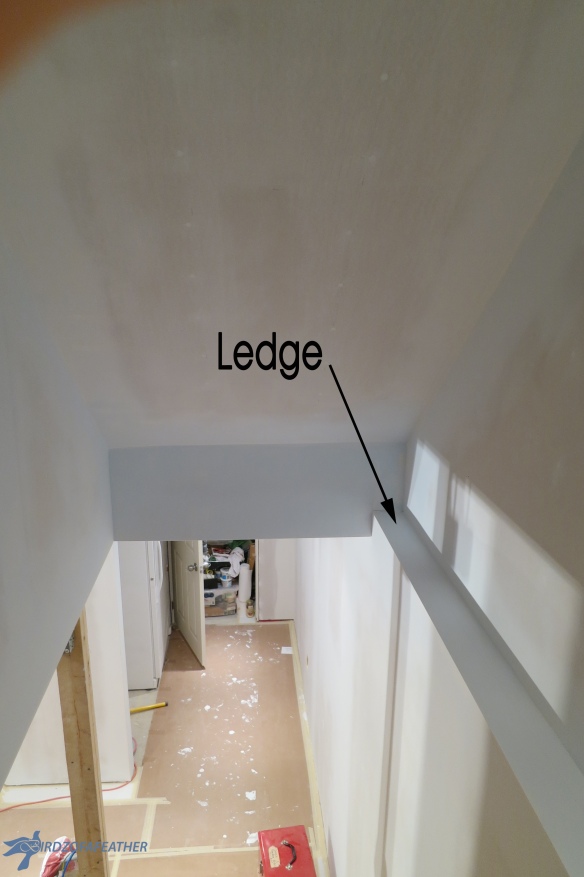 With the drywall complete, we went to browse Ikea picture ledges in anticipation of painting it. Ikea has two different picture ledge configurations we liked; one with a smooth base and the other with a groove to hold smaller items (both examples are shown below). 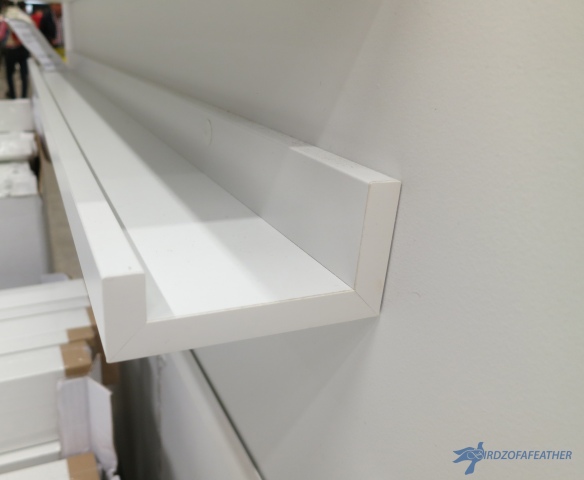 However, because of the length of our wall, we would’ve had to piece together two ledges. I didn’t like the idea of having a seam in the middle and a leftover space at the end. That’s when hubs decided to surprise me with a custom-made picture ledge.

When you’re making this project, the rail can be cut to whatever length you want. Keep in mind though as you determine the depth of your rail that there will be 1/2″ of material on either side of the base, so you have to take that into account when you’re determining your final measurements.

Because it was a surprise, I don’t have step-by-step pictures. But you can easily follow the plan shown below for inspiration. Use 1/2″ MDF (but you could also use wood) and cut three pieces to the length of our ledge. You don’t have to miter the corners like the Ikea example. Hubs simply used butt joints. Cut the front piece about 1 1/8″ high, the bottom 2 1/2″ wide and the back about 2″ high.

I don’t show a groove in the diagram above because that step is optional. But Hubs ran a router along the bottom piece through the centre, then primed all the pieces. The base was sandwiched between the front and back (with the router notch face-up) and joined together by gluing and using a pin nailer to attach the pieces. Once everything was nailed, he filled and sanded all the nail holes then painted with the same colour as our wall paint so it would all blend in seamlessly.

Hubs promised me a mock-up so I’ll update this post with a picture as soon as I have it.

UPDATE: here is the mock-up as promised; Hubs outdid himself and provided more than one style for you! The following mock-ups show 1) the v-groove routed into the MDF, 2) how the piece will look once it’s pin-holed together and finally, 3) a shot of the painted mock-up:

Stairwell Before and After

In a little over a month, hubs took the stairway space from this….

Don’t you just love the masking tape shoes to protect from drywall dust?

…. to this after the walls were painted. It’s already a huge improvement for such a small area, don’t you think?

You’ll notice that the picture ledge isn’t as deep as the drywall. It’s a good idea to make it deeper because drywall is never perfect, even with Hub’s level 5 finish!. Any discrepancies are less noticeable this way!

The beauty of this picture ledge project is that it’s inexpensive and you can make it any length and depth your heart desires! You also have the choice of any paint, finish or substrate you want. It’s so satisfying to  make something with your own two hands; it really doesn’t get any easier than this!

You can velcro the picture ledge in place for added security if you wish, but we just left it sitting on the drywall; the weight will keep it in place. If you don’t have a niche, like we do, you could also screw it into the wall in the traditional way.

Pinning is always welcome and appreciated.

There’s still more transformation to come when we tackle the stairs. We’re going to work with what we the builder provided and see what we can come up with (until we can afford to have a new one installed). I’m envisioning a milk paint project, but we’ll entertain any and all suggestions in the comment area 🙂 The stairs will be an epic and fun project!

Interested to see how the basement turned out? Here are a few more basement basement ideas.

Our most recent renovation post shows you how we knocked down a wall and opened up our space in our dining room, taking it from this… 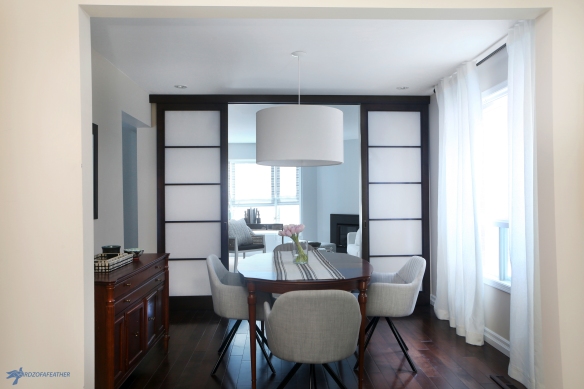 And here’s one of the projects Hubs built for his man cave; Pheonix Rising:

Into crafts? Be sure to check our Craft Rehab category.