Chicken Soup with Matzo Balls is a recipe that’s near and dear to my heart. I grew up watching my grandmother make chicken soup every week but sadly I didn’t attempt to make it myself until long after she was gone. What I wouldn’t give now to ask her a few questions about all her ‘recipes’! The fact is though, my grandmother never wrote down a recipe; she cooked by intuition; a little bit of this and a little bit of that.

Chicken Soup for the Soul

Matzo balls are delicious dumplings my grandmother always made to embellish her chicken soup but before we get to the matzo ball recipe, we’re going to need some chicken stock! Just thinking about her soup brings back the best childhood memories 🙂 No one makes better chicken soup than my grandmother did, but I think this recipe will come pretty close!

Chicken soup isn’t just a winter favourite; we enjoy it year round by freezing big batches. Nothing could be better than a steaming bowl of soup with matzo balls; chicken soup for the soul, as they say!

Step 1: You Will Need (for Chicken Broth) 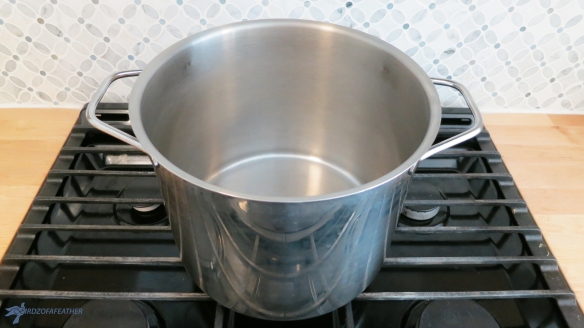 Start cooking early in the morning; the soup takes 4 – 6 hours to develop flavour.

We use 3 packages of chicken bones (ours weighed almost 3.4 pounds) and one breast or leg (another pound) for our soup.

Because a package of chicken comes with at least two pieces, we froze the other leg for our next batch. 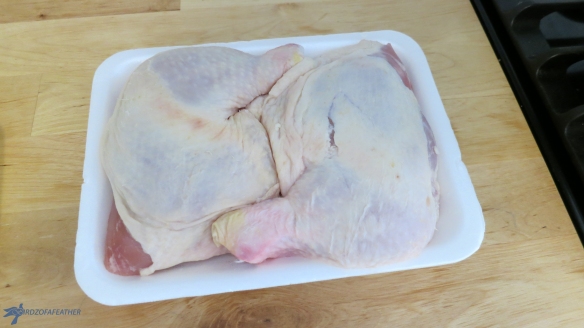 Buy organic vegetables where possible. I like to prep the veggies first before handling the chicken to avoid cross contamination (and also to have them ready to go). 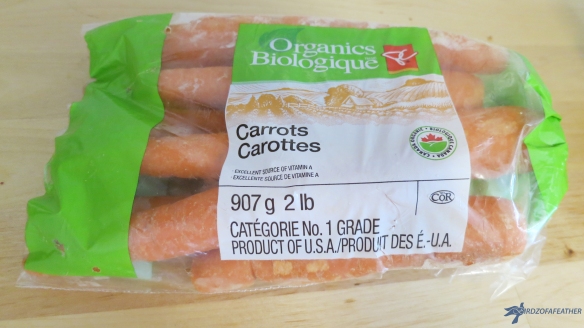 At our grocery store, both bones and chicken often go on sale the day before their best before date; when that happens we buy as much as we can and store it in the freezer until we’re ready to use it. Using chicken bones is an economical way to make the broth. The chicken and bones for our soup cost us just over $4 – which works out to less than .25 a bowl and worth every penny! The bones retain a lot of the actual meat and you’ll find the outcome is just as flavourful as spending a ton of money on chicken pieces!

You’re just a few steps away from rich golden broth!

Cut all the veggies and gather your seasonings. 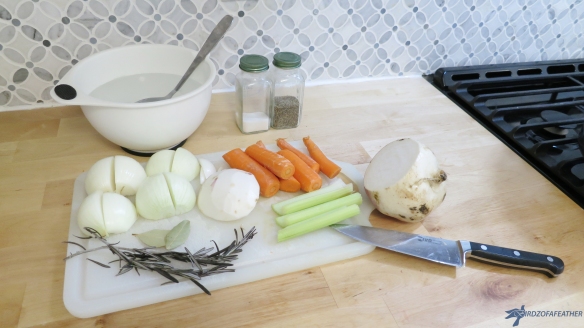 Place the bones in the pot. 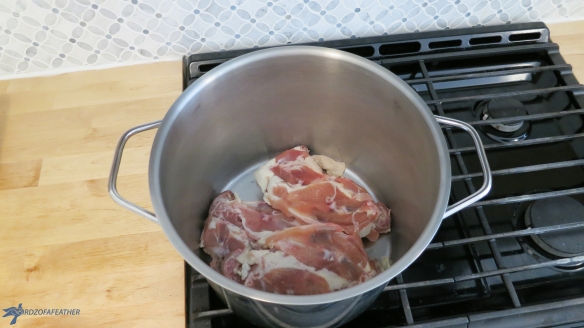 My grandmother always removed the skin from the breast or leg first but still added it to the pot. I think she did that to make it easier to remove and cut up the chicken after the first two hours of cooking. 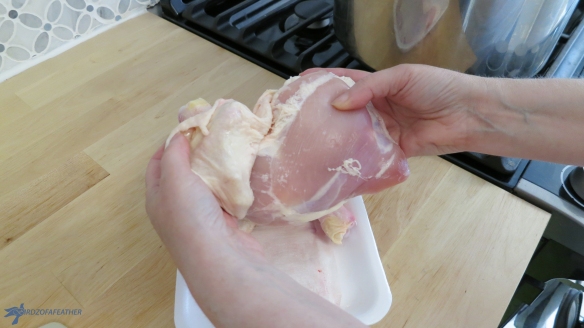 ALWAYS WASH YOUR HANDS THOROUGHLY after handling chicken and wash anything that came into contact with it too (i.e. counter, faucet handle) to avoid contamination.

Pour cold water into the pot until it’s just covering everything (I usually use about 18 – 20 cups for the size of the pot and ingredients I’m using). Note that at any time during the cooking, if the liquid evaporates too much you can add a cup or two of water back in, which my grandmother often did (but don’t overdo it or you’ll dilute the flavour!) 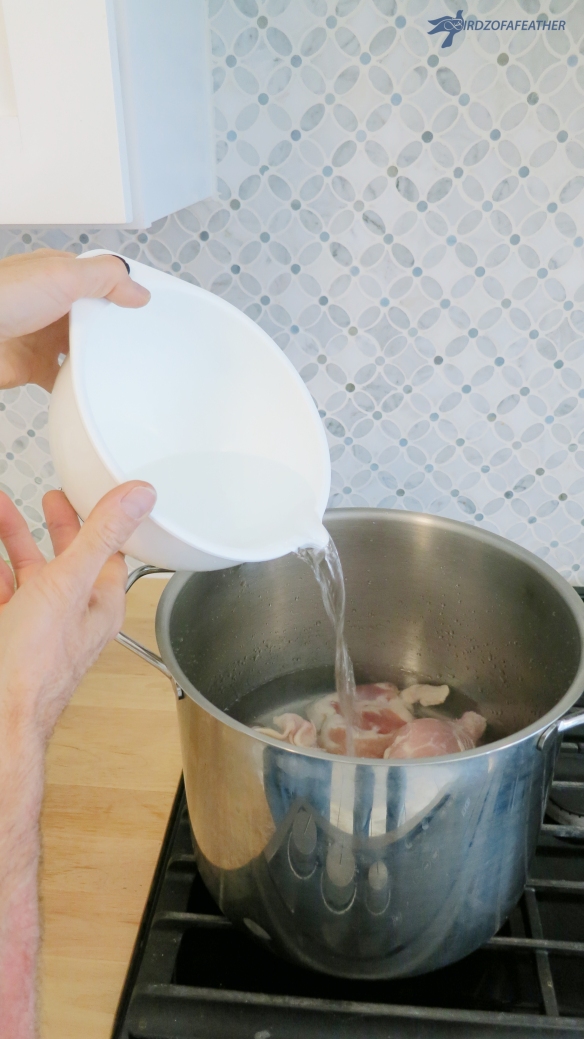 Bring the water to a boil over high heat and move onto the next step to skim the soup. 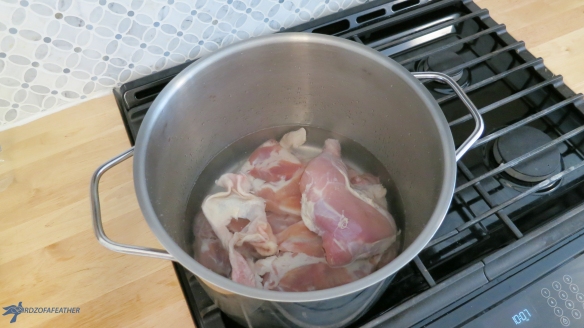 Turn the heat down to a rolling simmer and then skim off the solids and foam that floats on the surface using a spoon dipped in water. 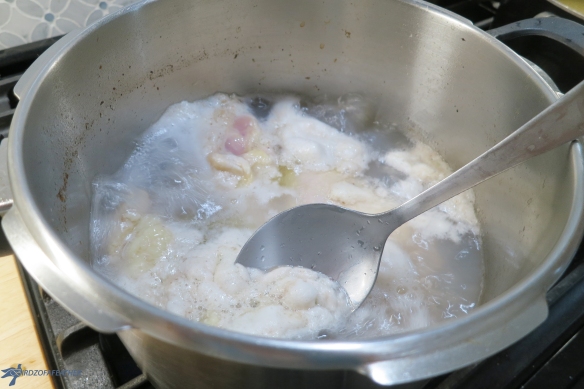 Keep a bowl of water on the side to transfer all the particulates to. It takes about 20 minutes or so of skimming before the soup is clear and the rest of the ingredients can be added. 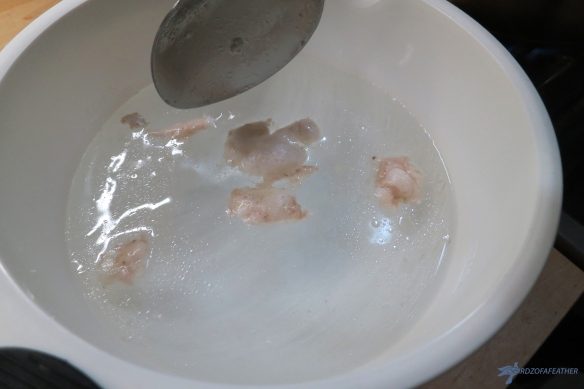 If you don’t remove the scum, it will not affect the flavour in the least however, it does affect the look of the broth. As you can see below, on the left is a beautiful clear broth while on the right the stock is cloudy. Which would you prefer to eat? I’d rather take the extra time to end up with a professional looking broth! 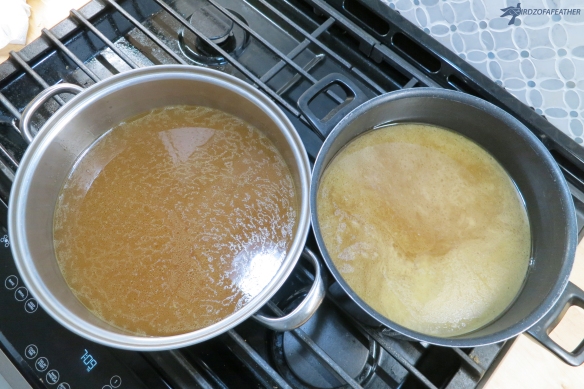 The next picture shows all the stuff that was skimmed from the soup. Don’t be tempted to dump it down the drain; it can clog your plumbing. You can pour this through a coffee filter to catch the particulates and dispose of the solids in your green bin – then you can put the filtered water down the sink. 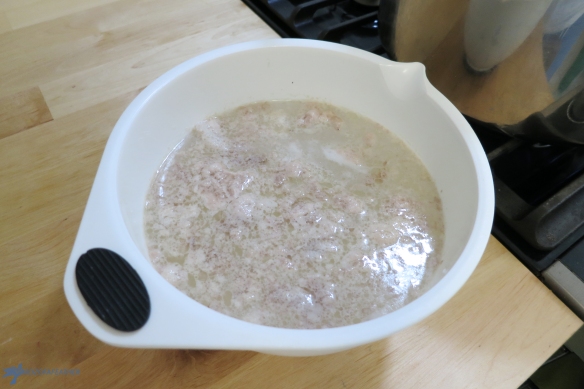 Once the liquid is clear, the aromatics go into the pot along with the seasonings. Adjust the water if necessary so everything is still covered. 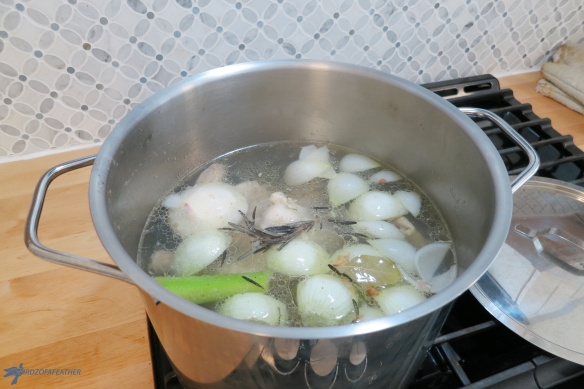 Cover the pot with a lid, but leave it slightly open. 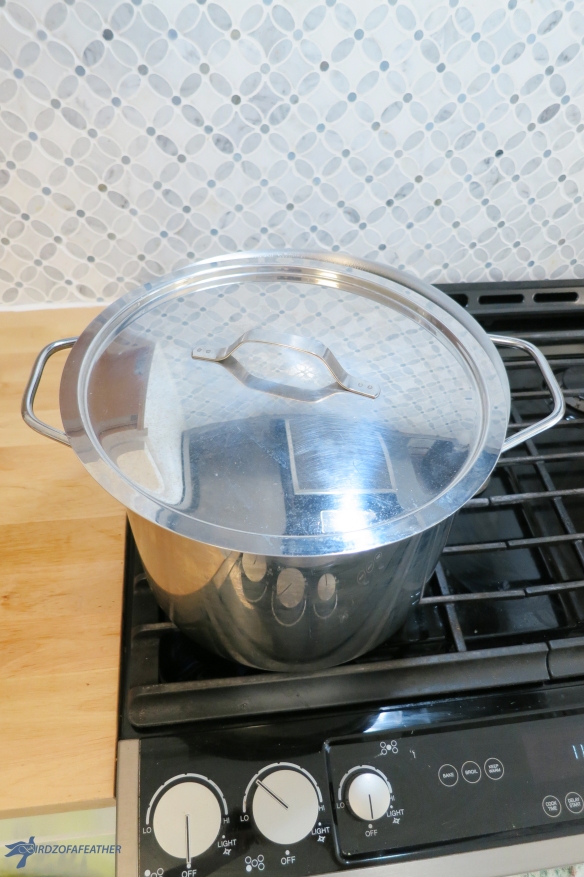 There’s nothing better than the aroma of chicken soup bubbling away on the stove! Make sure at this point that the bubbles are just barely breaking at the surface; turn the heat down further if necessary and check the soup every once in a while to make sure it’s not cooking too rapidly or over-evaporating. 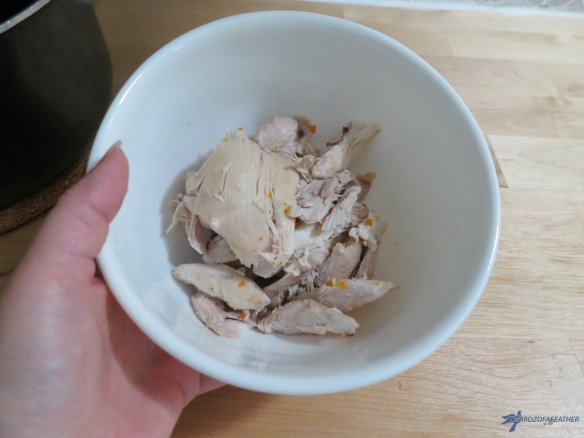 Simmer the soup for a total of 4 – 6 hours; I find that the longer and slower it cooks, the more collagen-rich the broth gets. As I mentioned before, if you notice the liquid over-reducing during that time you can add a few cups of water back in. 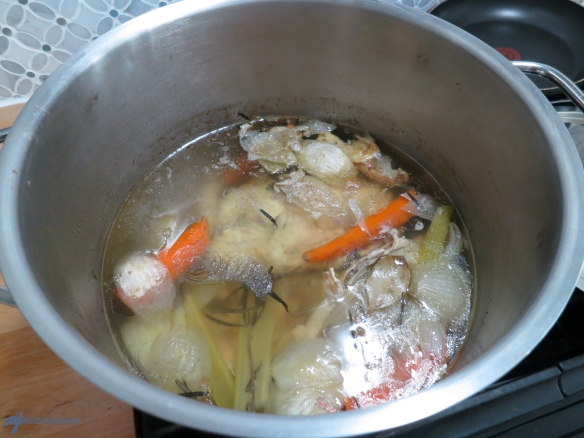 When the soup is done cooking, get a clean pot and set it on a cork pad (because the bottom will heat up quickly once the liquid is strained into it). 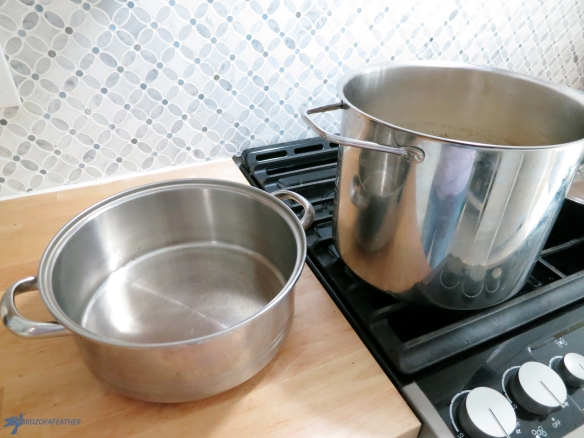 Strain the liquid through a fine meshed strainer into the empty pot. Allow the broth and solids to cool down to room temperature and then discard the solids in the green bin. We sometimes put the pot into an ice bath in the sink to cool the liquid faster if we’re short on time. 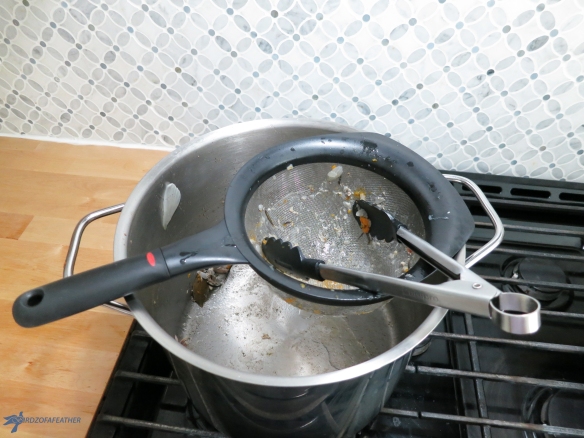 There’s usually some decent chicken meat still left on the bones which I eat it as a snack (the chef should always get a snack for his/her effort!)

Once the broth has cooled down, cover it. Sometimes the bottom of the pan is still warm, so I set the pan onto a cork pad on the fridge shelf. 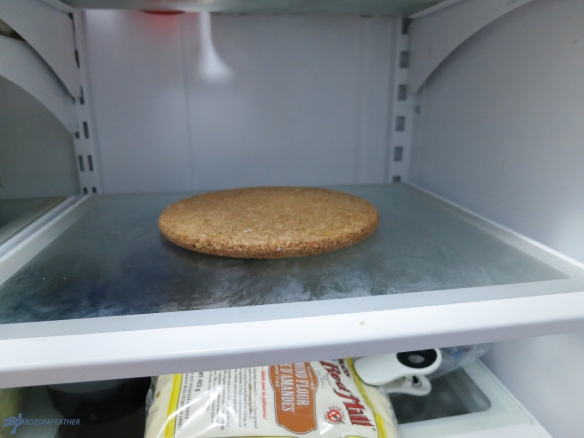 Leave it in the fridge overnight so the fat solidifies on the surface. 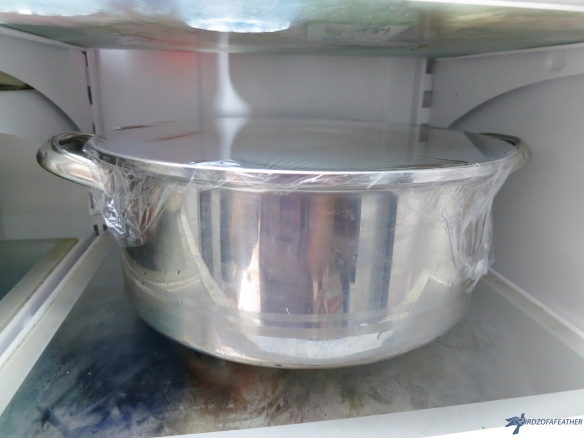 Watch this quick video of skimming the fat from the soup after it’s been refrigerated overnight and heating up a bowl with matzo balls and other goodies (subscribe to my YouTube channel while you’re at it)!

When reheating the chicken soup, it’s nice to add back in some fresh vegetables (such as sliced carrots, celery or even frozen peas near the end) – and cooked chicken – as you’ll see in the video! Keep the lid covered until the raw veggies are tender, and the is meat heated through, or your delicious broth may evaporate into thin air before it’s ready to eat!

Step 7: Skim the Fat to Prepare to Make the Matzo Balls

The next morning, take the soup out of the fridge and remove the solidified chicken fat from the top. You need to reserve this fat to make the Matzo balls. 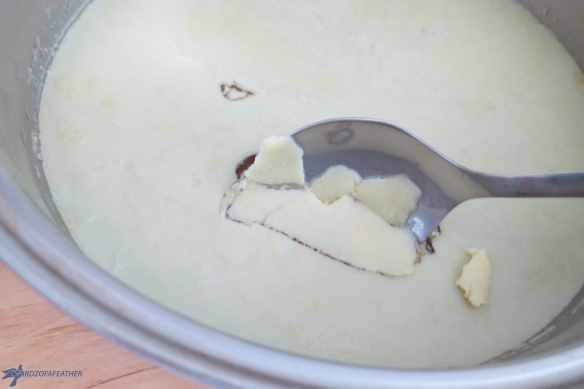 We divide the fat up into small containers with 1/4 cup in each one. We often freeze one batch of fat (called ‘schmaltz’) so we can we make fresh matzo balls at a later date when we want them. 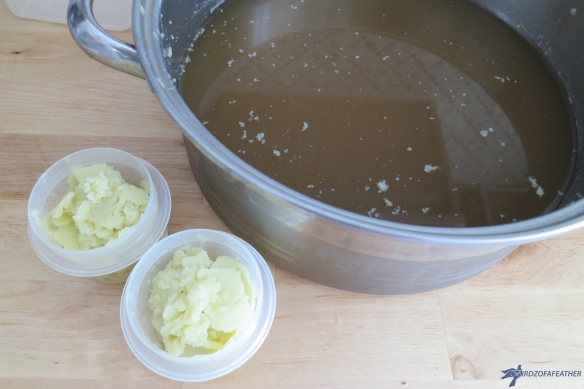 Alternatively, you can use all the fat to make a few batches and cook the matzo balls all at once. They can then be frozen in Ziploc bags. We use the medium ziplocks and freeze about 4 – 6 at a time – as you’ll see when you get to the matzo ball recipe.

We also divvy up the chicken stock and freeze most of it for later using Ziploc screw top containers. It’s the perfect amount for the two of us for one or two meals. A note about freezing the broth: don’t be tempted to add in cooked chicken pieces or veggies or even matzo balls; it can all tend to go mushy and cloud the broth if you freeze it together with the soup.

Below you can see the towering results; well worth the effort for liquid gold! 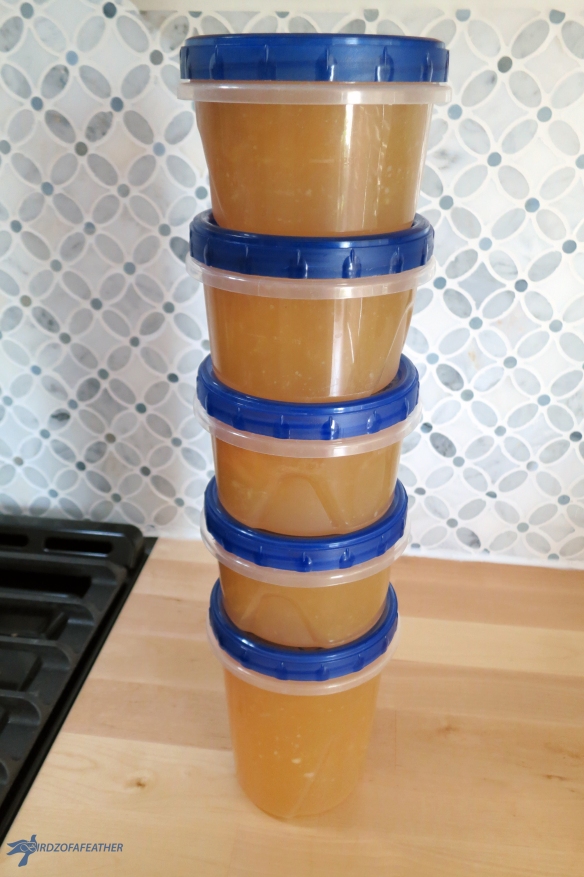 Step 8: Gluten Free Matzo Balls – What You Will Need 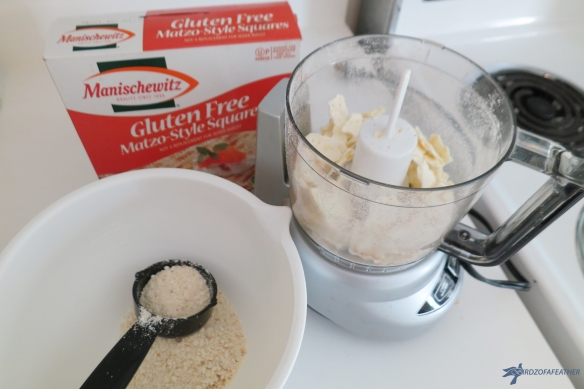 Until gluten free matzo was available, I was unable to make decent matzo balls for the soup; thank goodness it’s available now!

The secret to a delicious matzo ball is using the chicken fat; you could substitute plain ‘ol oil, but why would you want to?

This recipe will make a fairly firm matzo ball with some bite. My grandmother always included the ground almonds, which I love, but when I’m going to be serving them to guests I leave that extra ingredient out (due to potential nut allergies). 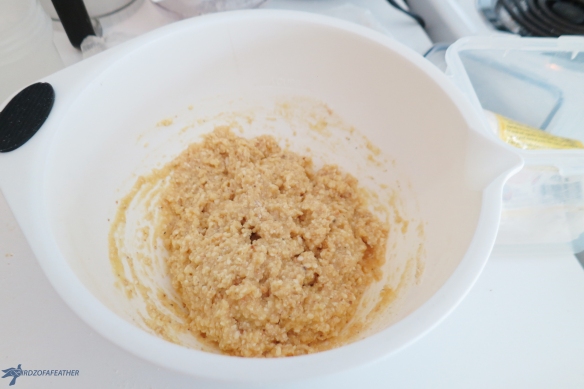 Mix eggs with the ‘schmaltz’, salt and pepper. Pour egg mixture into the dry mixture and gently mix with a fork. Don’t over mix or they may be tough.

Cover the mixture and place it in the fridge for ½ – 1 hour. Don’t skip this step as the liquid needs to get absorbed to achieve the proper consistency before cooking.

Bring a large pot of salted water to a rolling boil on the stove.

After the matzo ball mix has chilled, lightly roll teaspoon fulls into 1″ balls. You may need to keep your hands damp to prevent the mixture from sticking.

I roll and lay them out on waxed paper all at once, but you could also drop them directly into the water if you roll fast. Gently separate them in the water if necessary to prevent sticking. 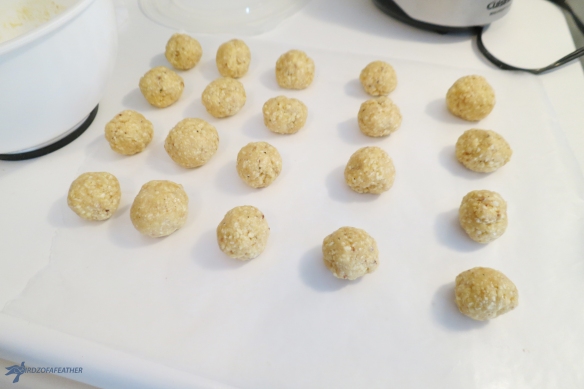 When all the balls are in the water and they float to the top, lower the temperature to low. Cover tightly and simmer for 25 minutes at a rolling simmer. DO NOT STIR. Remove from water with a slotted spoon and transfer the matzo balls with a slotted spoon to already heated broth. Simmer 15 minutes more in the soup. 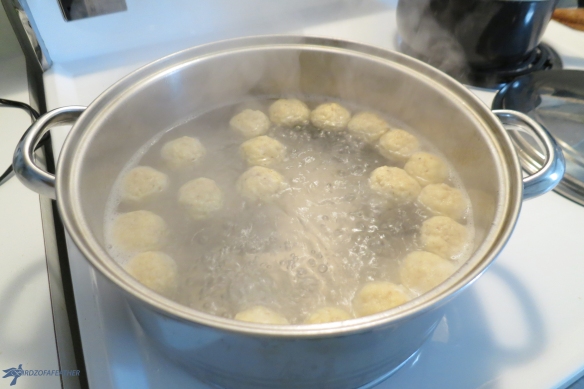 Step 11: They Freeze Well Too!

When I freeze the matzo balls, I never leave them in the broth. I put them on a tray and pop them into the freezer for an hour. Then I pile them into portioned out ziplock bags (I used the medium size) – about 4 to 6 to a bag so my husband and I can share them when we heat up the soup. 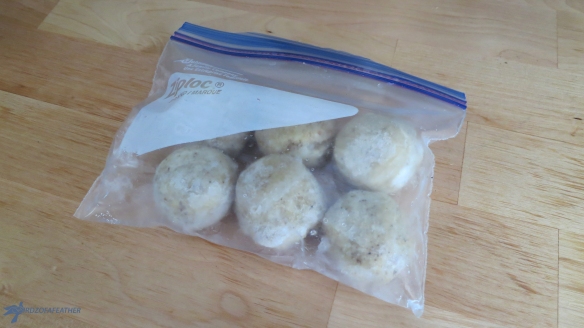 Don’t forget to add the date for both the matzo balls and broth! Using painters tape and a marker, you can make removable lables so you can re-use the containers again and again. 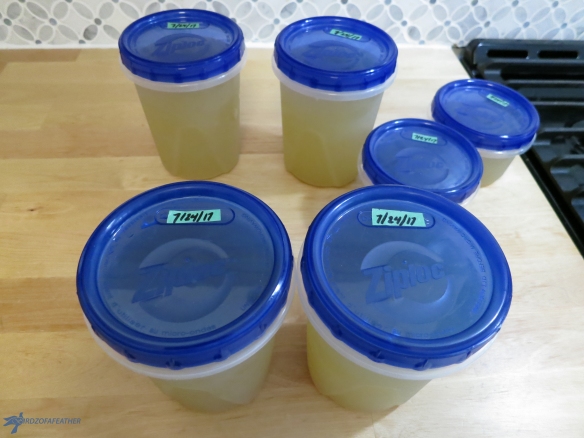 Thaw both the matzo balls along with the frozen soup in the fridge. Reheat the chicken broth first on medium heat and keep covered so the chicken soup doesn’t evaporate. I’ve forgotten to cover it on occasion and it can disappear fast into thin air!

After the broth is hot, add the matzo balls and cook it together for another 15 minutes (keep the pot covered) and serve.

If you keep the freezer well ‘stocked’ (pun intended) you can enjoy chicken soup with matzo balls whenever you have a hankering for some good ‘ol comfort food. 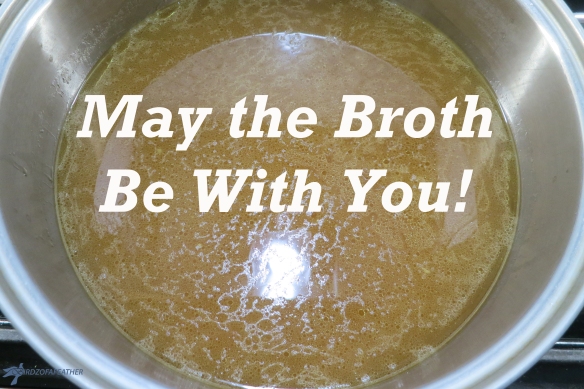 Chicken soup with matzoh balls is our very first recipe on Birdz of a Feather under The Unknown Chef banner!