What do you get a Mom who has reached an 80th milestone? That’s a rhetorical question of course, but if you love to upcycle, like me, you get your craft mojo on!

Earlier in the summer, we were at a massive street sale –  held in the golden triangle in downtown Toronto – when I came across this bag of scrabble tiles:

I didn’t have a clue what I’d ever need them for – but I never do when the urge hits to buy something for the craft stash! Inspiration almost always hits later. I often find that when I fail to purchase an item I spy it’s always a regret.

Luckily I purchased the bag of tiles, because Mom’s birthday eventually provided the inspiration 🙂

In lieu of making a birthday card, I’m  embellishing the envelope instead and putting it into this shadowbox as a keepsake for Mom.

For this quick and easy shadowbox project, you’ll need:

It’s fairly easy to design and print an envelope with a home printer and Microsoft Word; it just requires a bit of customization for the margins and page setup. (I still use the old Word 2003).

For the page setup, I measured the size of the envelope ( I included the height of the opened flap). In word (file/page setup) I clicked on the paper tab and typed in the measurements for the width and height. Envelopes have to be fed through the rear paper slot of your printer since they are a custom size, so don’t forget to change the paper source to ‘rear paper feed slot‘ while you’re at it.

Next, set the margins. The envelope flap I was 2.5″ high so I set my top margin to 2.5″ so nothing could print above that margin (represented by the dotted line shown below). I then set the rest of the margin settings to .12.

Once the settings are done, go ahead and type/format the message. Choose a size and style of font that looks good to you (I used Aardvark). I designed my envelope in black and white, but you could choose to do yours in colour if you prefer.

Insert the envelope into the rear feed slot: be mindful of which end goes in first and whether the paper needs to face up or down. For my Epson printer, the flap went in first and the paper was face up.

Click on print, then choose properties. Choose ‘envelope’ for paper type and select rear paper feed slot as the paper source (sometimes you have to change it here too).

Now for the finishing touch – the scrabble tiles. Place a ruler over the envelope to act as a straight edge where you want to place them. I used antique irons as weights on either end to keep the ruler from shifting as I worked.

I centred the word ‘eighty’ and spaced out each letter leaving 1/4″ gape between letters (I ended up with 3/4″ on either end). 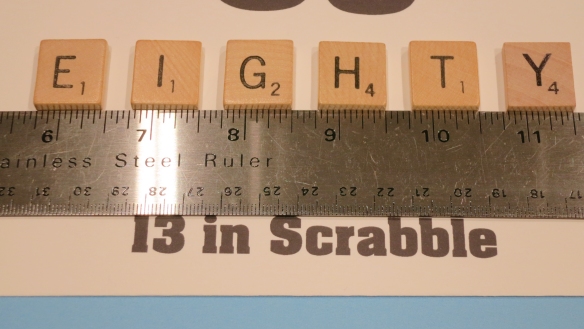 Lift each tile and place a piece of double-sided tape on the back. Then press it into place on the envelope.

Scrabble Tiles are Not All Created Equal

Note that not all scrabble tiles are made alike; some of them have a nice varnished finish and others are still pretty rough. I would suggest using a stronger double-sided tape than the one I used if your tiles are raw wood (I couldn’t find my better roll of tape and Mom’s birthday is tomorrow)! I was able to make it work because I chose tiles that were varnished and the flimsier tape gripped perfectly to them.

The shadow box I used has a magnetic catch so I just popped it in and fastened it to the background with the pins provided. Mom can just reach in and grab the envelope to open it up and read the card (leave the flap unsealed if you don’t want Mom to accidentally tear your hard work). 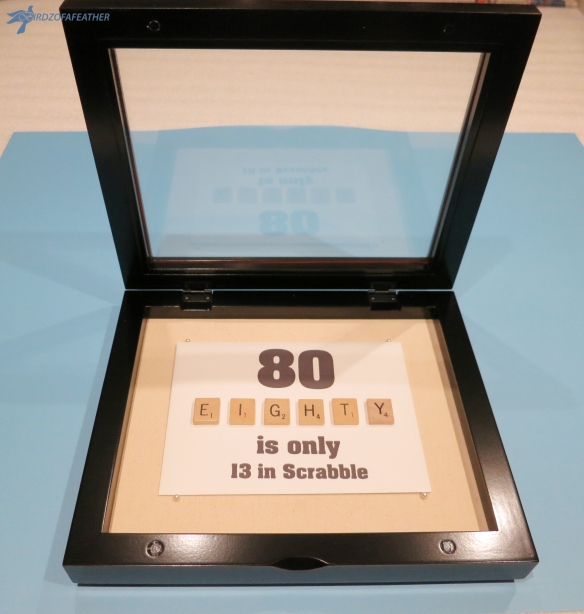 Mom has always loved puzzles and word games, but we’ve never actually played a game of scrabble with her. Maybe once the season changes, we’ll settle in for a game or too 🙂

By the way, this idea would work for any milestone birthday. You could easily adapt it for anyone – like the ’50’ example below!

If you have parents that have reached a milestone birthday, I’d love to hear how you celebrated them. Let us know in the comments.

When it Rains, It Pours

UPDATE: Not long after I used the scrabble tiles for Mom’s 80th birthday, we found an entire box of games at a neighbour’s curb. There was a scrabble game buried in the bottom. There may be more scrabble upcycles in the near future, but for now Hubs and I are enjoying using it for what it was meant for – as a game! At least until Hubs gets tired of losing to me ?.

You’ll find our home and garden DIY projects on the home page.